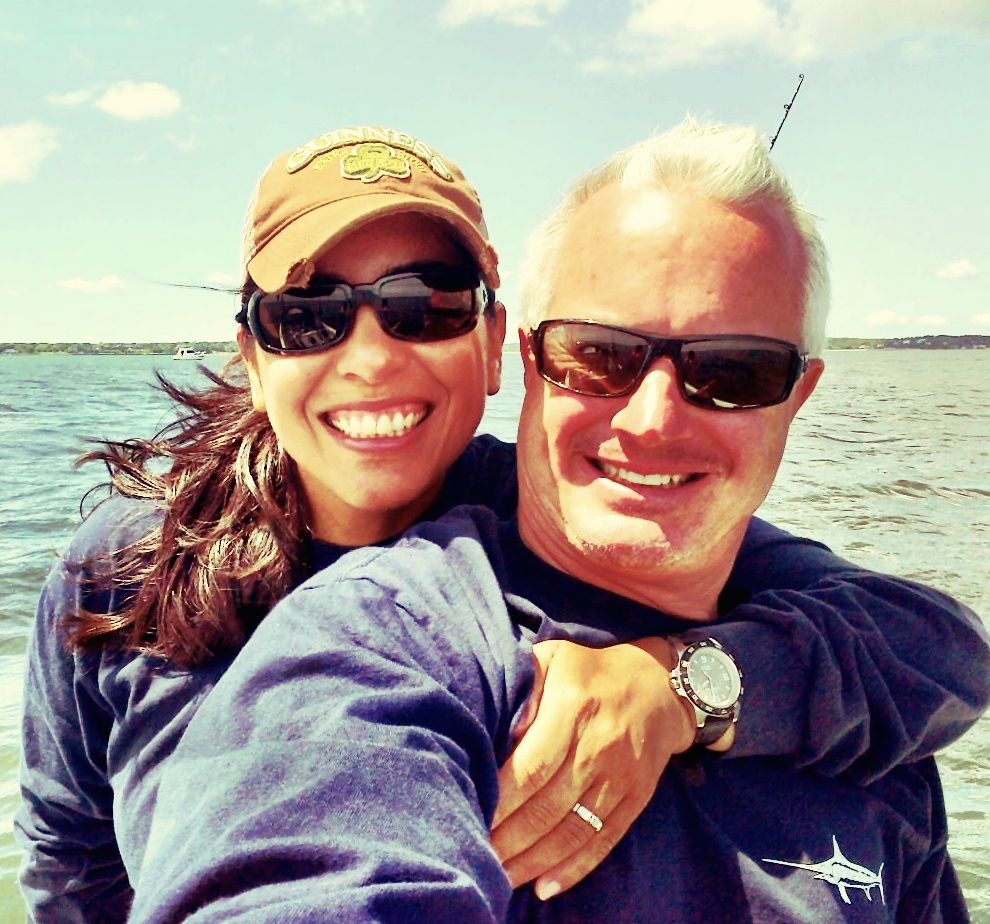 WARNING: You could be about to feel like a boring old married couple after reading this feature..

Meet the Millers of Hampton Bays.  Photographer Kimberly Miller and her husband Gerard Miller [who is a cameraman and videographer for CNBC Business News] spend countless days on the water wrestling around with Mako sharks.  “The largest shark we ever brought in was a 300 pound plus thresher shark [a shark whose tail is as long as its body].  It was just the two of us on the boat and it took Gerry three hours to reel it in.  He was so exhausted by the time it came up to the boat he could hardly move a muscle.”  Just another day in the life for this Hamptons couple.  Kimberly whisks readers out to sea in this exciting NEW KDHamptons Lifestyle Diary, below: 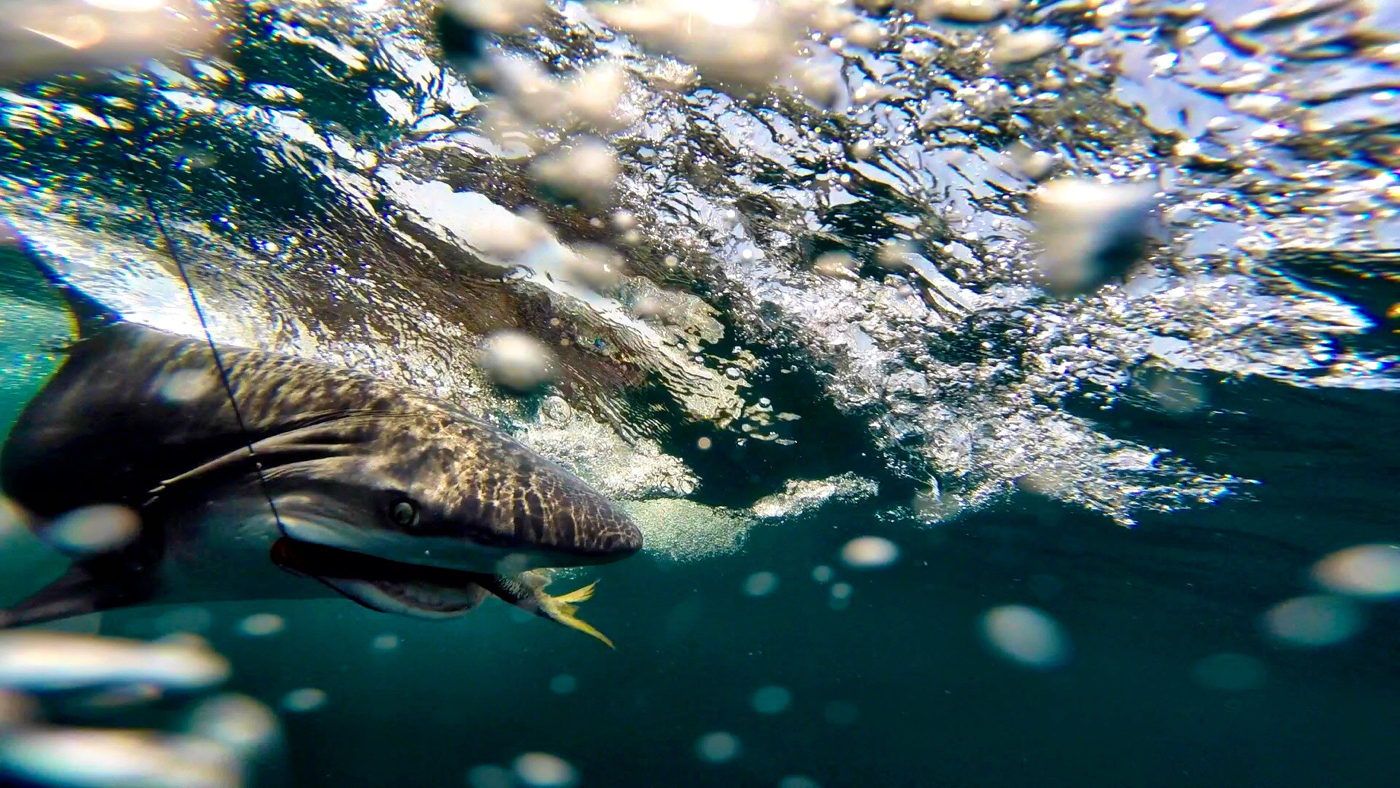 KDHamptons:  How long have you been coming to the Hamptons and what do you love most about it?

Kimberly Miller: Gerard [Ger] spent his childhood summering in the Hamptons.  In 1962, his father met a builder on an empty lot and signed over a $50 check from a client as a deposit on a future house…and so began his lifelong love affair with the east end.  We love living so close to the ocean. Whether it be going to the beach for the day with our two boys, Brody (11) and Wesley (8), fishing for striped bass, or shark, or heading out to the Canyon for some offshore fishing on our friend Paul’s boat….there is just so much to do if you love the water.  We can’t imagine not being here all summer. 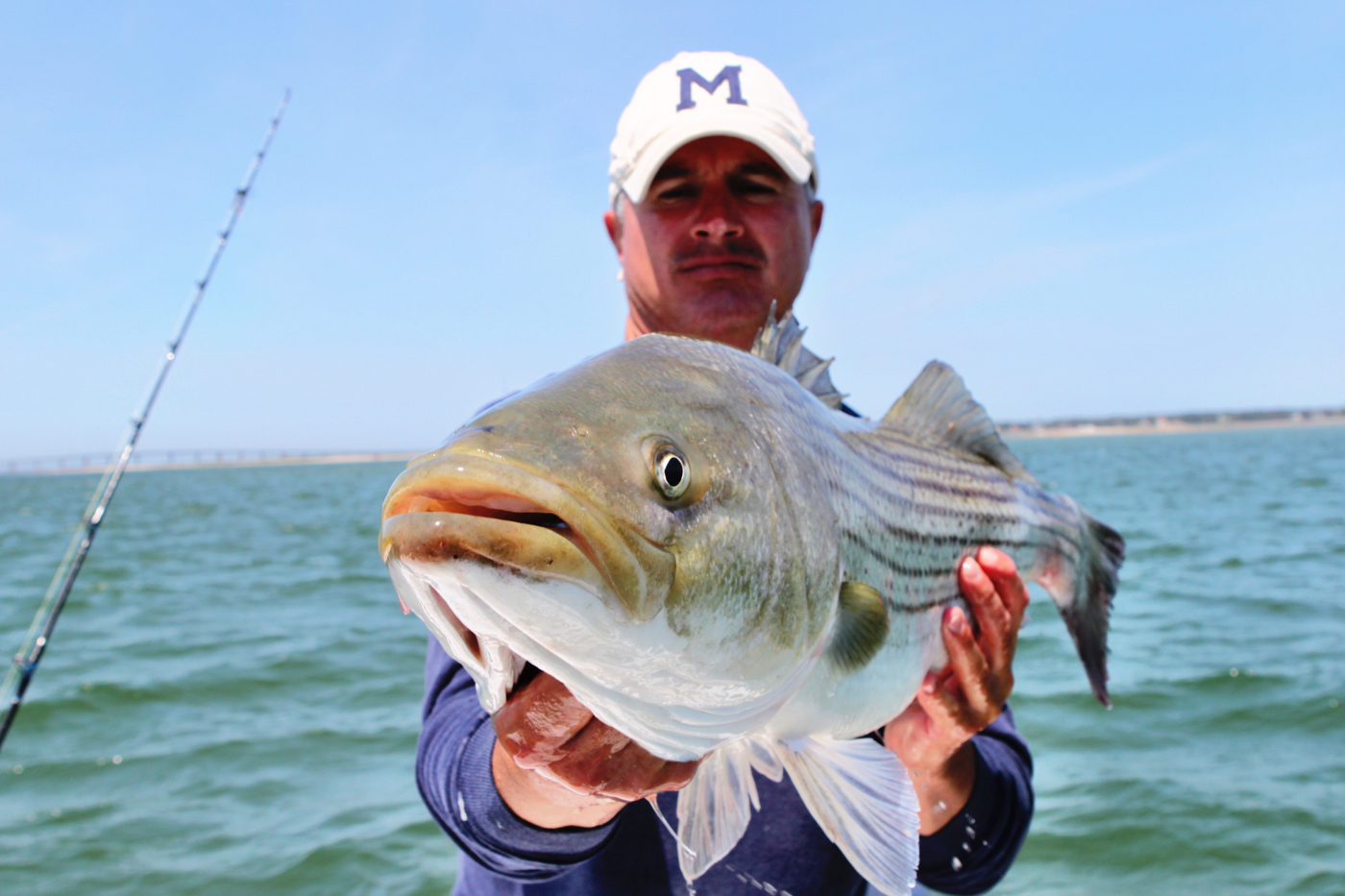 KDHamptons: What inspired you to launch your company Shinnecock Angler?  You also have a clothing line, tell us about both?

Kimberly:  We launched Shinnecock Angler as a way to combine our love of fishing, photography and the Hamptons.  It’s also a great way to share my images with the public, especially fellow Long Islanders who love to fish as much as we do.  I sell my photography through my website on smugmug: ShinnecockAngler.smugmug.com.  We have a small line of Shinnecock Angler kids and adult t-shirts as well as hoodies that can be purchased at White Water Outfitters, 288 E. Montauk Highway, in Hampton Bays, or directly through us by emailing ShinnecockAngler@gmail.com

KDHamptons: What does a perfect day in the Hamptons look like to you?

Kimberly:  Start out the day early by getting an egg sandwich/coffee, and our lunch at Katrinka’s Deli in Hampton Bays.  Head over to White Water Outfitters, chat with Bryce and Lisa and ask where the fish are biting.  Be on the boat and in Shinnecock Bay by 8am. We would see birds working just outside the inlet…go over to them….cast some surface plugs and hook up with some bluefish.  Now that we have some action boys would come out, steal my rod and have some fun reeling them in.  When we got tired of catching bluefish [which we would freeze and use later for shark bait] we would anchor up at one of the bay islands only accessible by boat and let the boys play around for awhile until it’s time to set up for striped bass fishing on incoming tide.  Ideally, we would have pretty steady action hooking up with stripers of all sizes and only keep the two biggest which topped out over 35 inches. 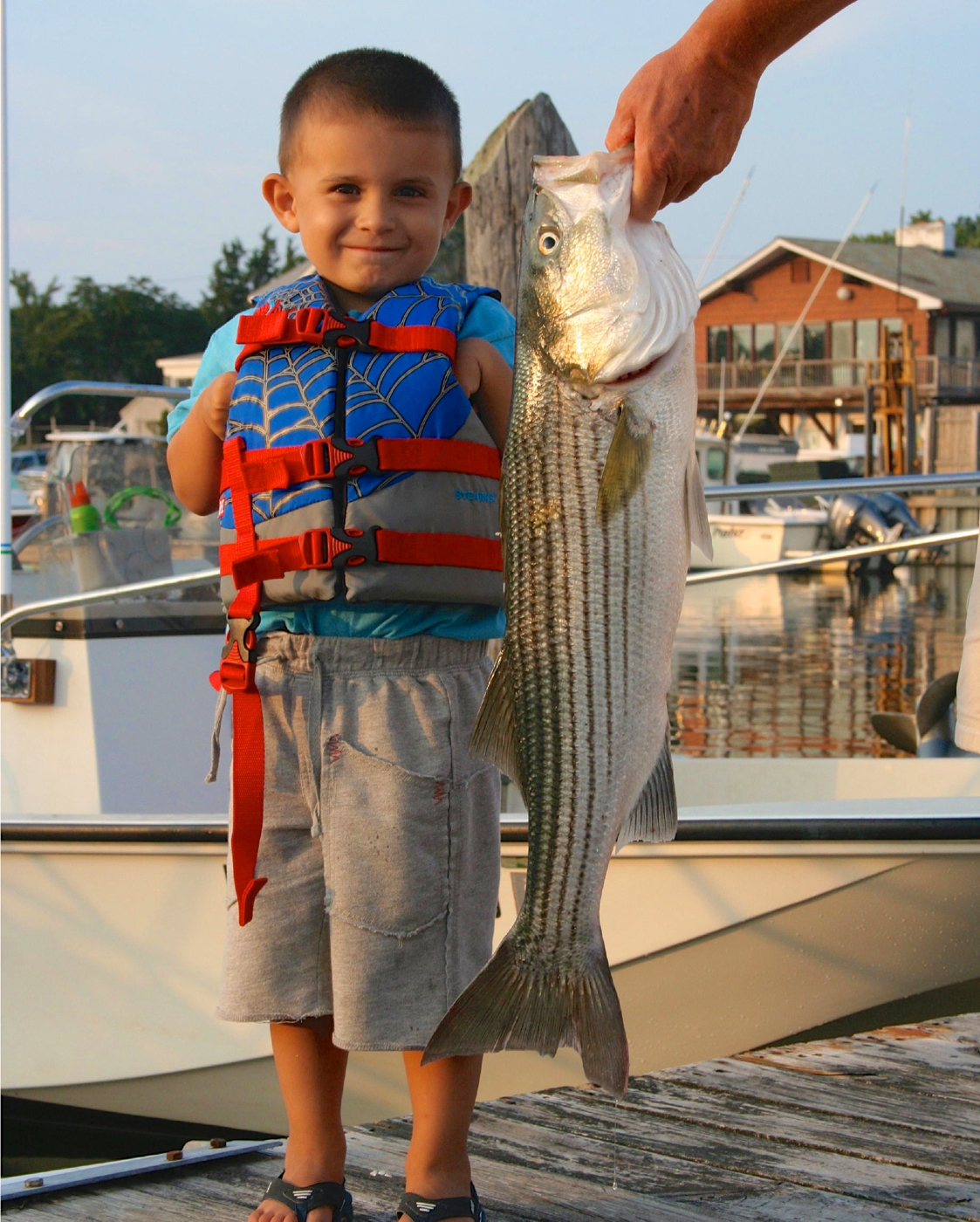 About 3pm we would pull the anchor up and start heading home….stopping midway to take a few trophy pics [because taking photos when you are still on the water is ALWAYS better than doing it back at the marina]. We’d pack up the car and while Ger finished cleaning up the boat the boys and I would watch him on the deck of the Backbar Grille sipping a margarita and two Roy Rogers.  Then its back to the house for grilled striped bass for dinner − from sea to table in a matter of hours, nothing better!  We’d cap off our perfect day by having a few cocktails with friends outside at Cowfish or Oakland’s. 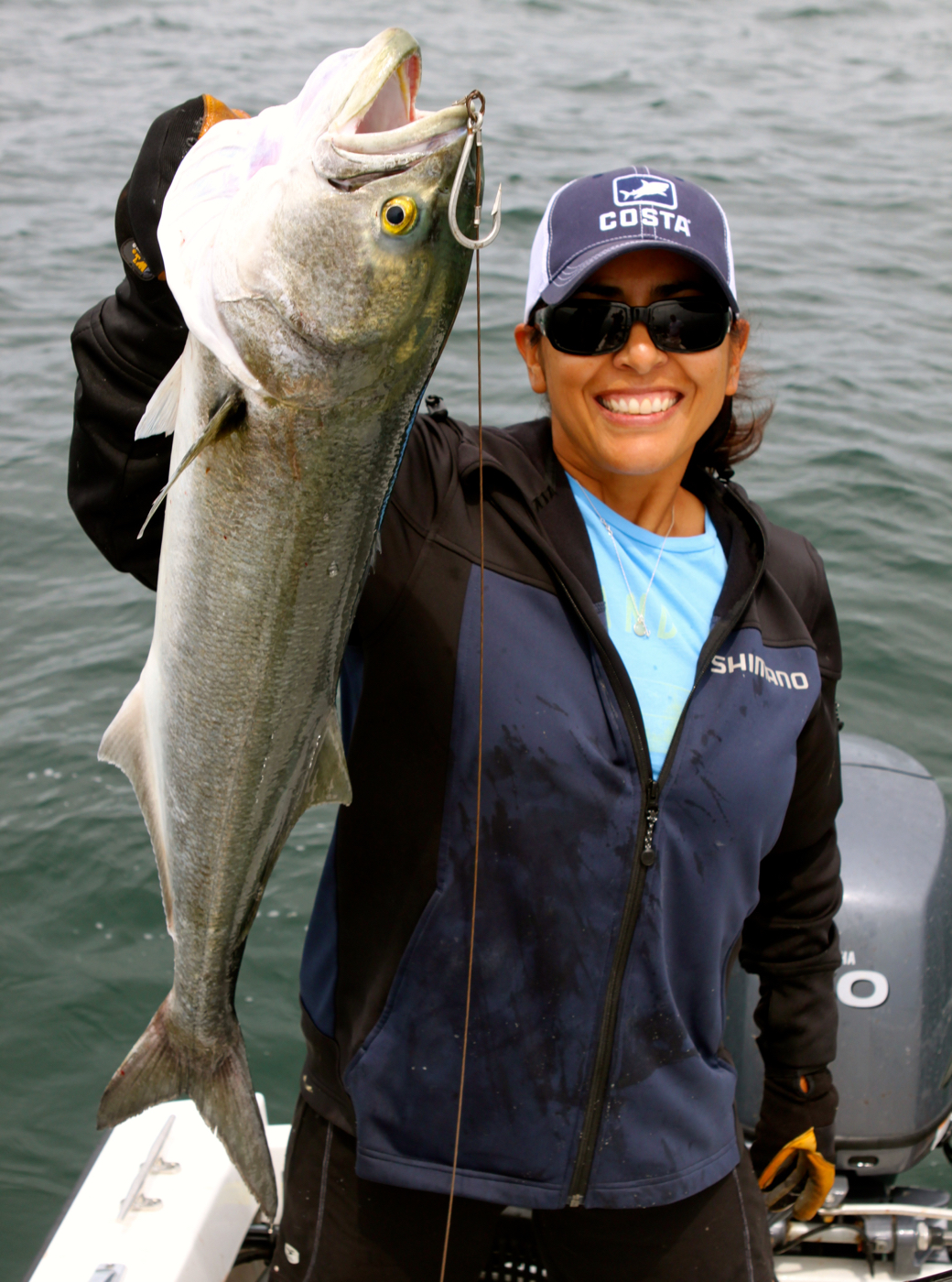 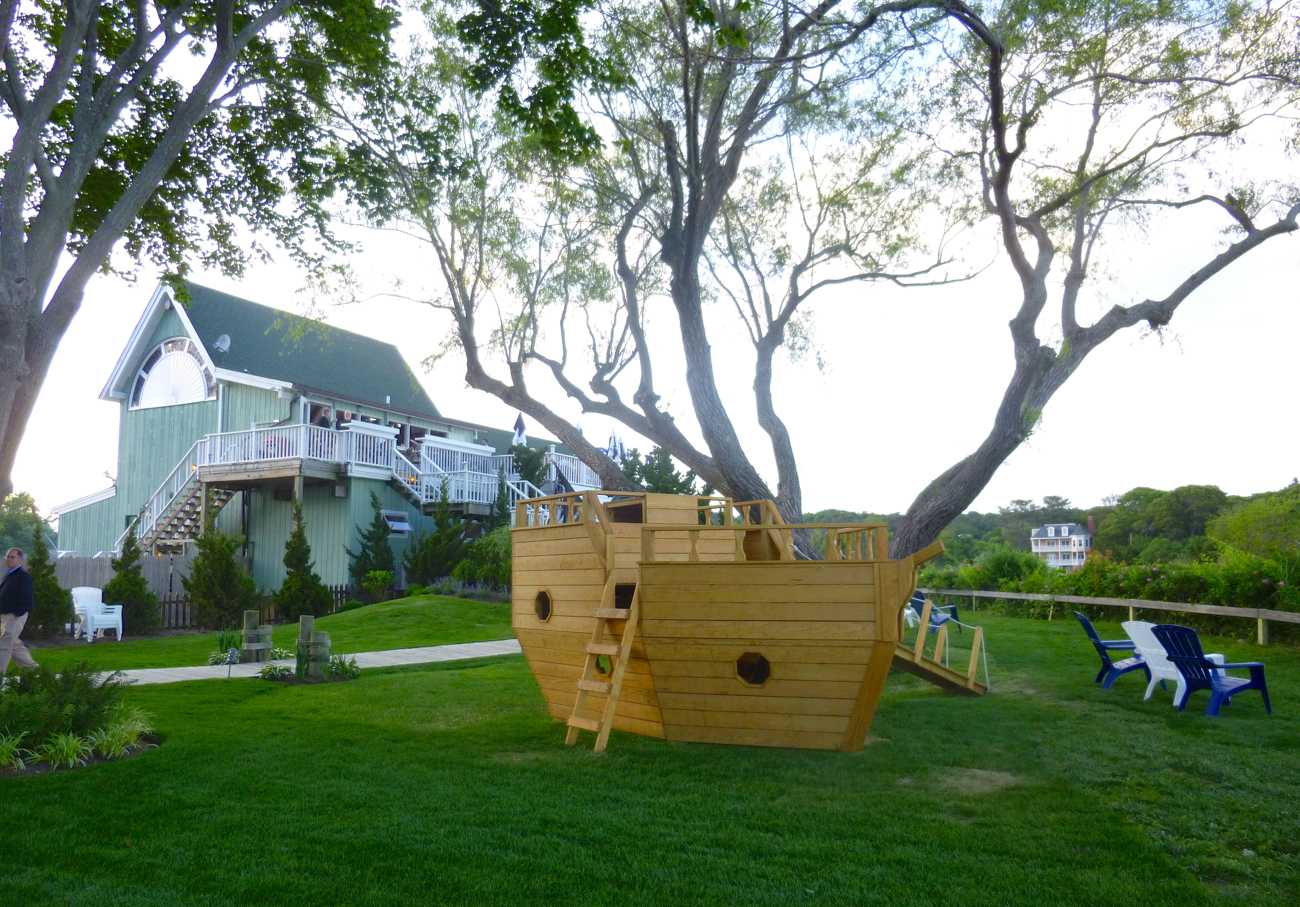 KDHamptons:  Which camera do you shoot with?  How do you get those extreme shots?

Kimberly:  I shoot with a Canon but I am a GoPro junky at heart.  I go everywhere with my Hero4 and cannot imagine a day on the water without it.  Mount it to a pole and its great for taking selfies that don’t look like selfies.  It’s waterproof and small and great for getting up close and personal with the fish we catch, especially sharks. 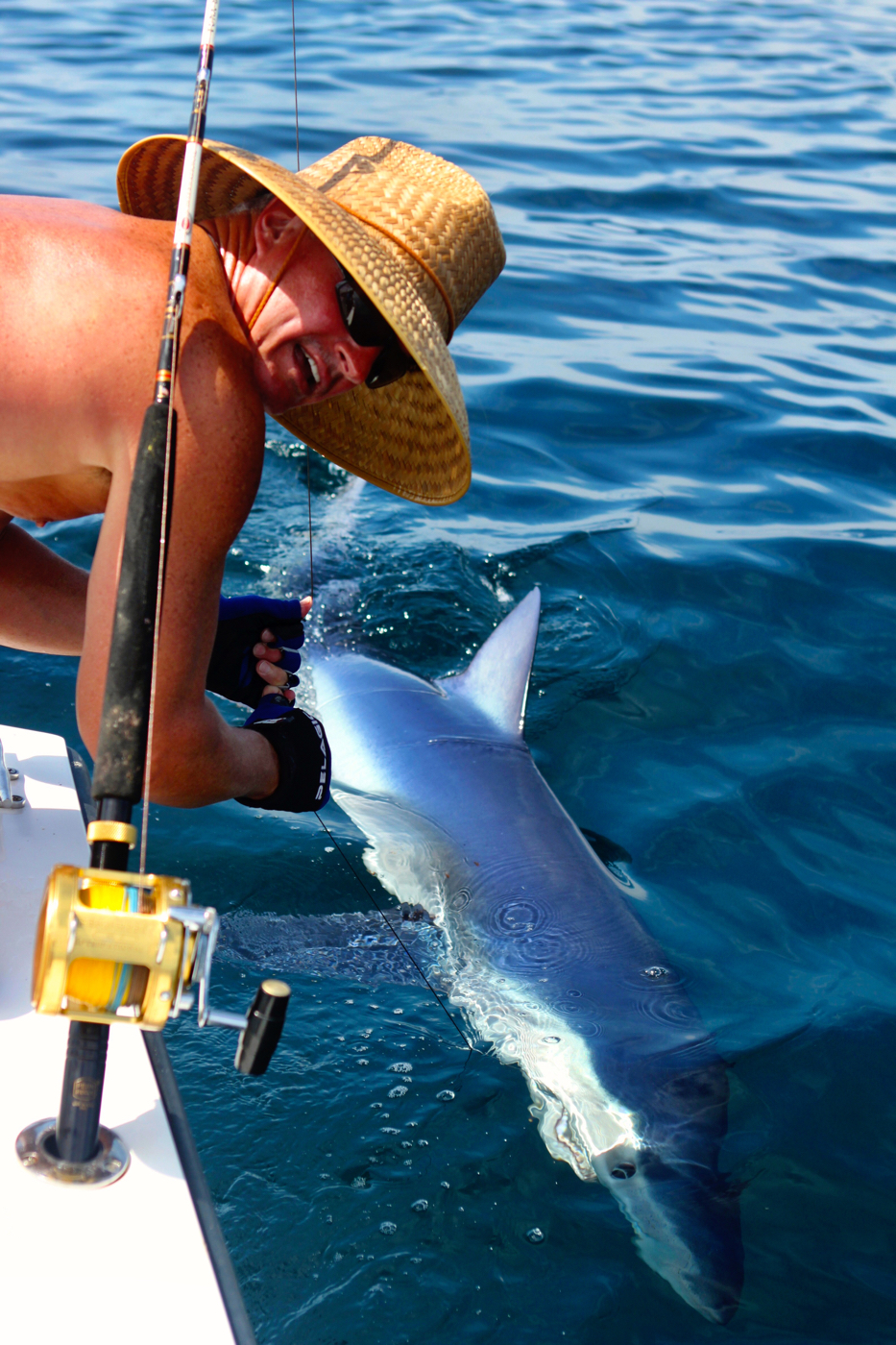 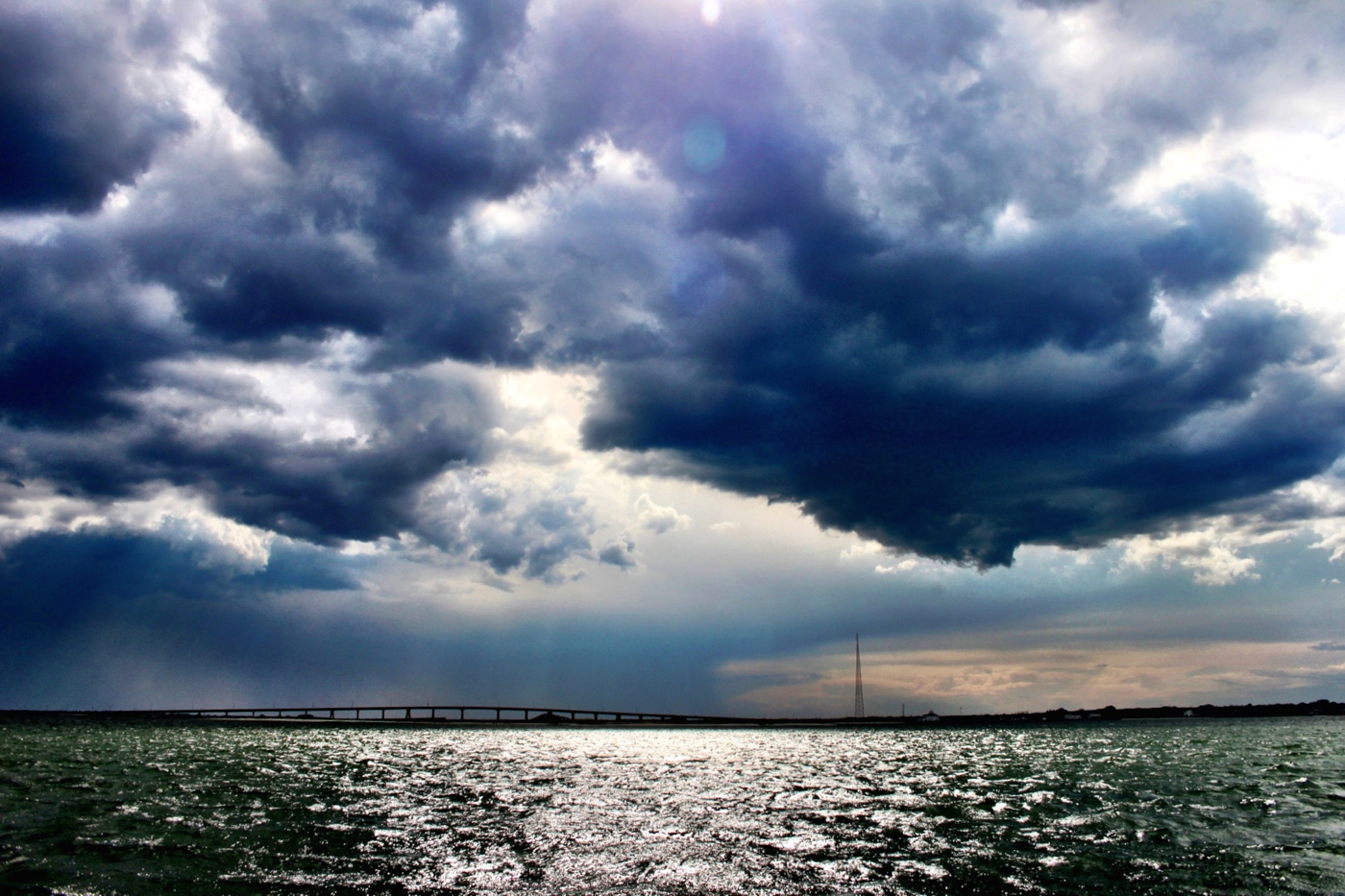 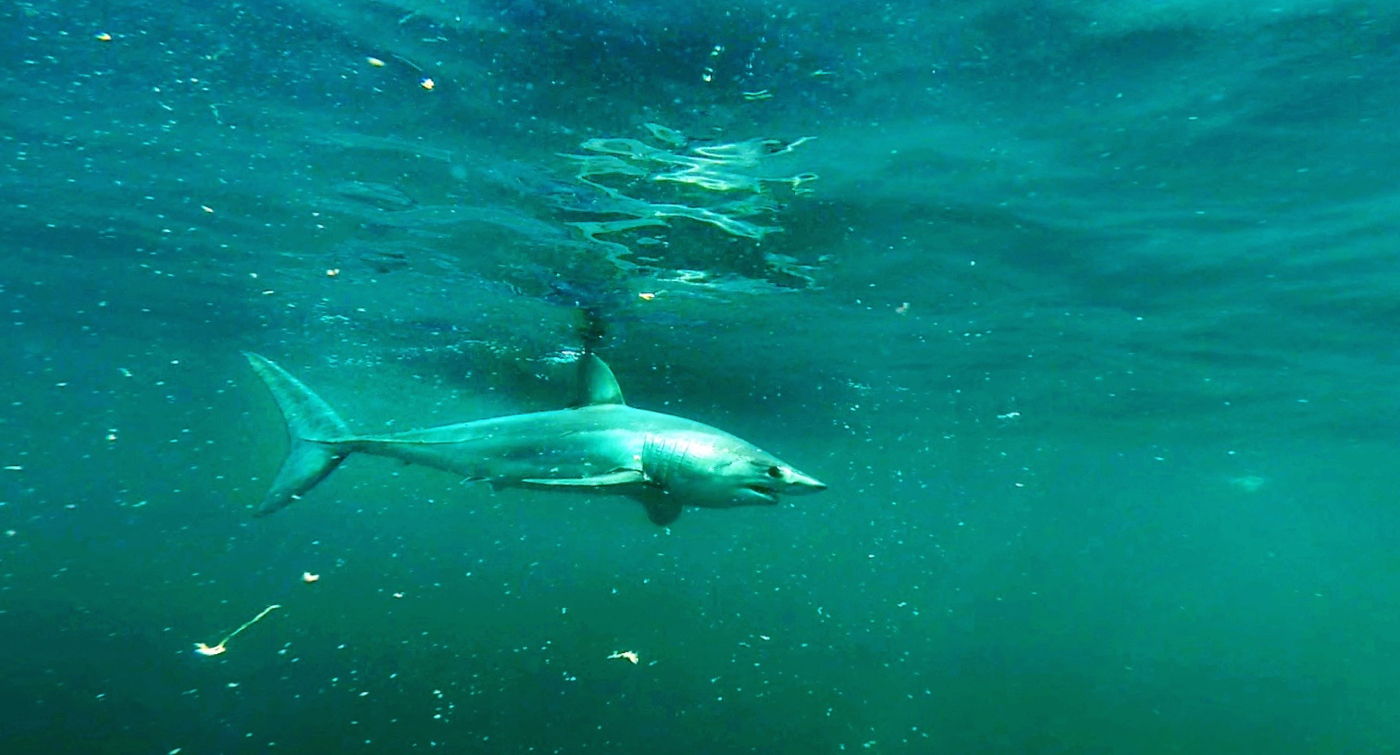 KDHamptons:  How do you handle the fish you catch?

Kimberly:  We try to tag as many mako sharks as we can for NOAA through their Apex Predators Program, as well as remove the hook before they are released.  Obviously, this can be dangerous endeavor…they have really sharp teeth and tend not to cooperate. We have had a couple close calls, but never anything that’s resulted in a bite.  I don’t know of any serious fisherman who doesn’t have some sort of battle wound.  Except for the fish we catch and use for bait, we release everything we don’t plan on eating.  Our favorites are tuna, thresher, mako and striped bass….probably in that order.  The best way to prepare fresh fish is simply, on the grill…so you really get to enjoy the flavor.  Sea to table in a matter of hours, nothing better! 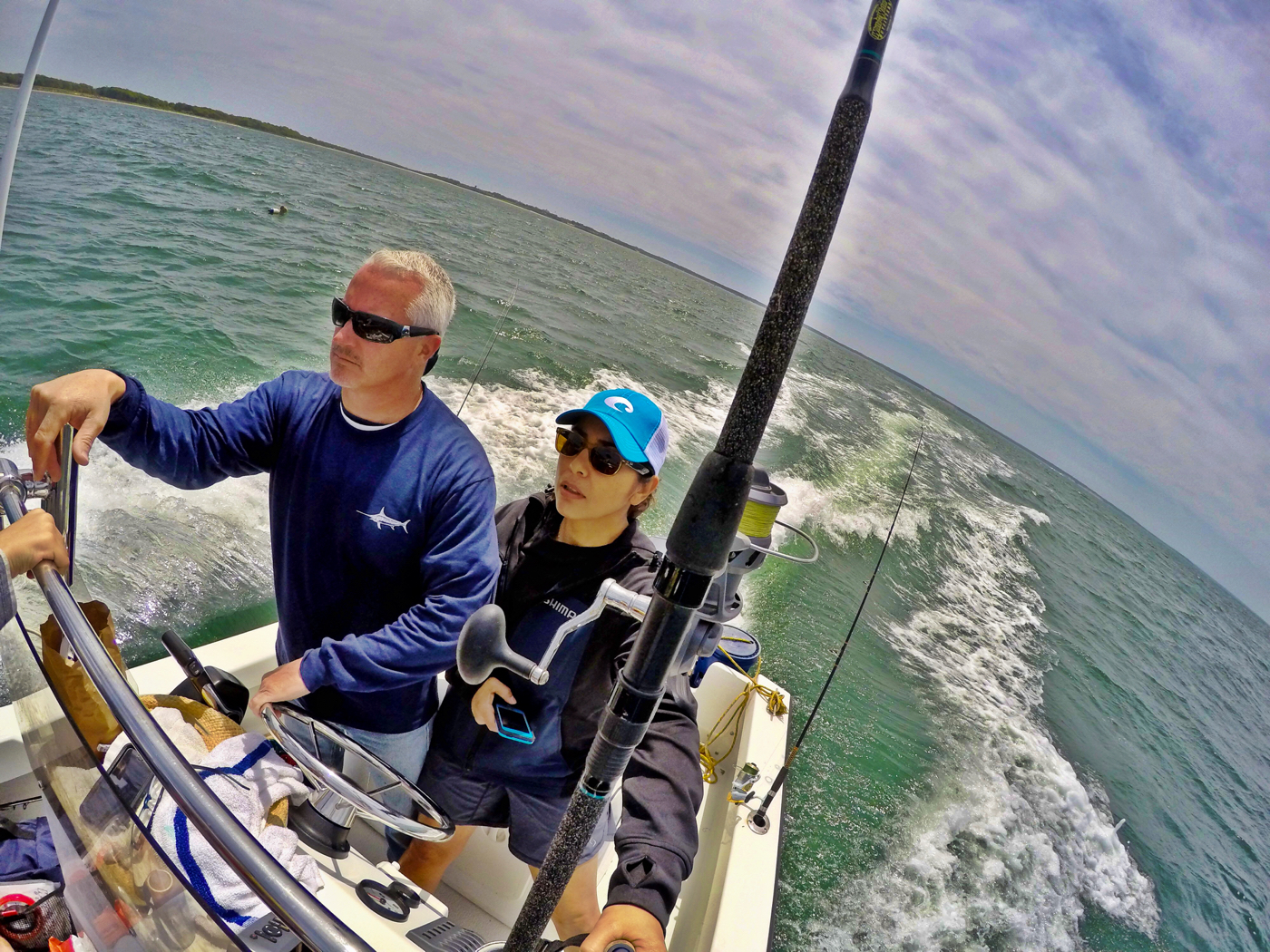 “On one perfect day last summer we pulled in a beautiful 80 lb bluefin tuna,” shares Kimberly. 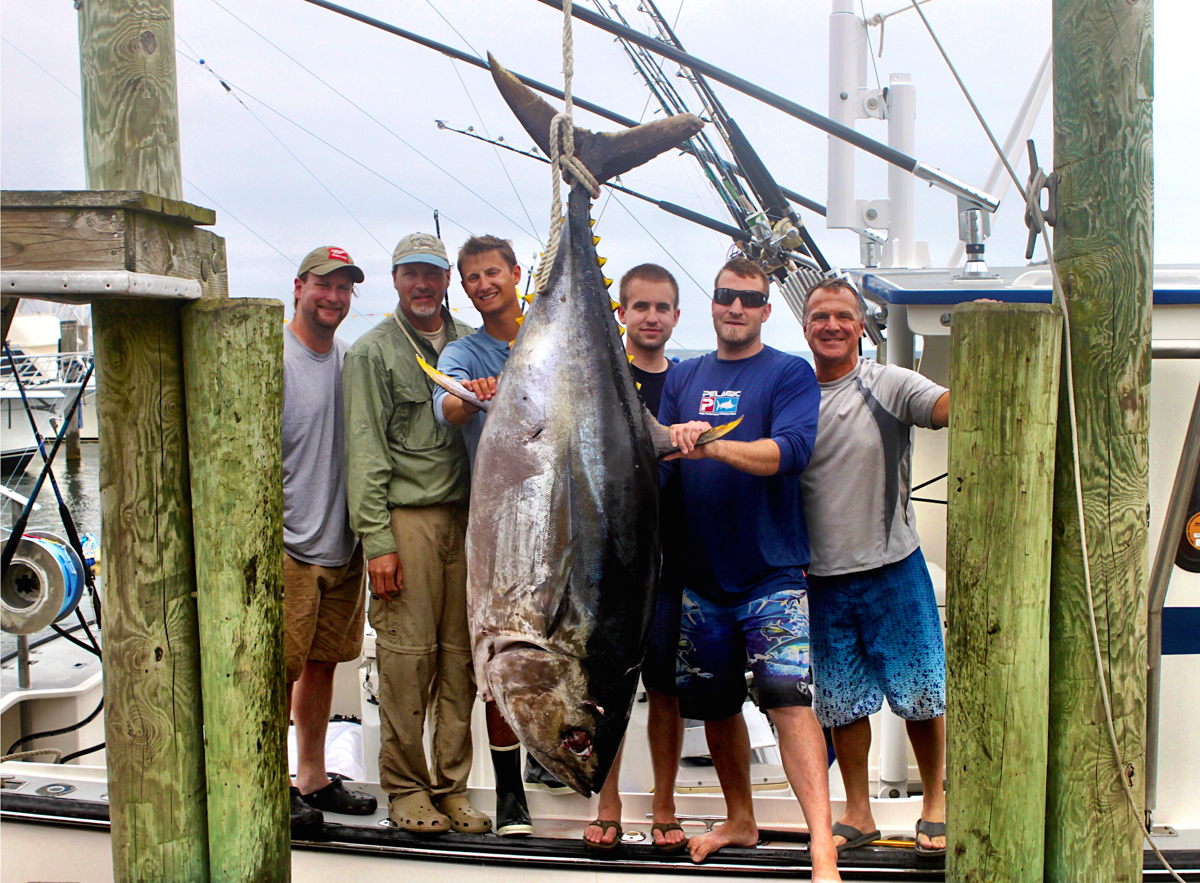 KDHamptons:  Do you feel fear when you are swimming with sharks?

Kimberly:  Ger took me shark fishing pretty early on in our relationship − talk about an exciting first date!  I have been fishing now with my husband for 20 years, and I can honestly say that I am not afraid of sharks anymore…my feelings over the years have developed from fear and ignorance to respect and awe.  I am truly amazed by their beauty and power, and LOVE being able to photograph them.  That being said, I still worry every time Ger releases a shark and tries to remove the hook.  I have seen the size of those teeth up close and know the damage they can do.

Kimberly:  The beauty of being out in the ocean is you never know what’s going to come up to the boat. One time we were out drifting and saw a pod of whales close by…..exciting, until they came right for us and swam under the boat!  I think my heart stopped until I saw them surface on the other side.  Ger and I have read too many survival stories about sailboats that are sunk by whales. 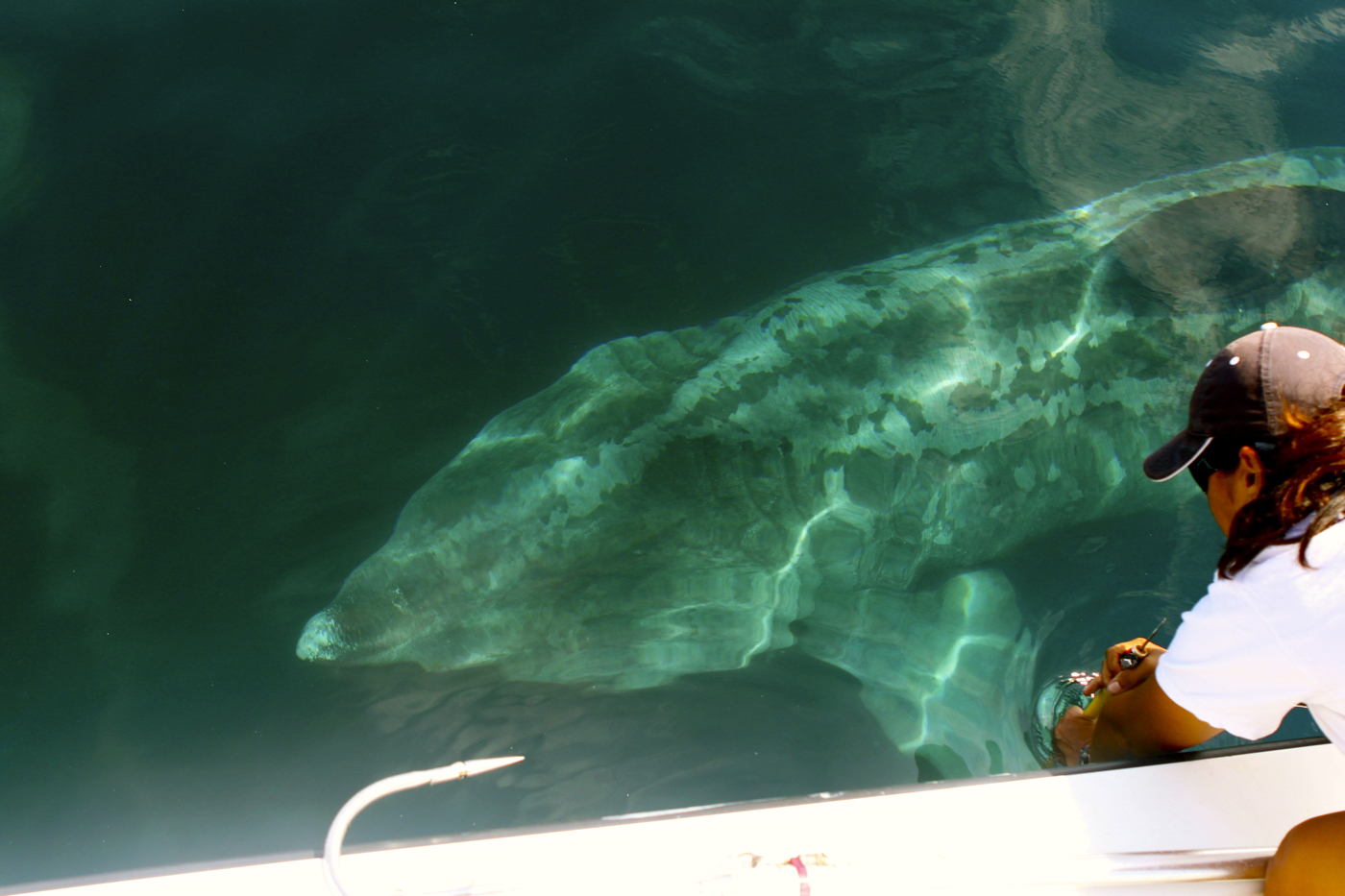 One time we had gone hours without a runoff and were thoroughly bored − until a huge basking shark came up right under the boat! [above]  I was so excited,  and then crazed about getting my GoPro going jumping under the water. 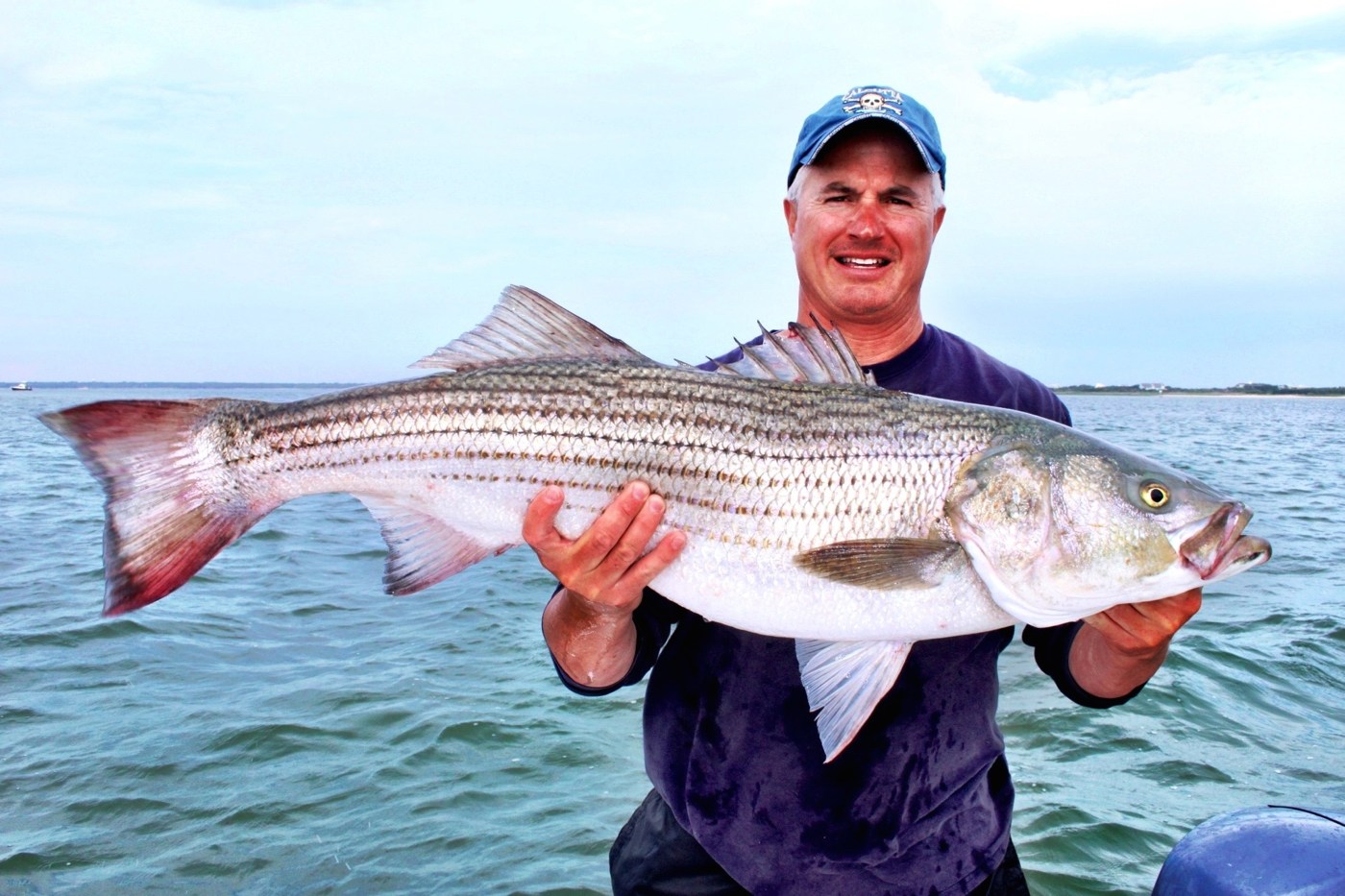 Any big plans for summer Gerard?  “To fish as much as possible!  Spend quality time as a family and enjoy the summer with all the Hamptons friends we’ve developed over the years. ”

KDHamptons:  Where can our readers follow your fishing adventures? 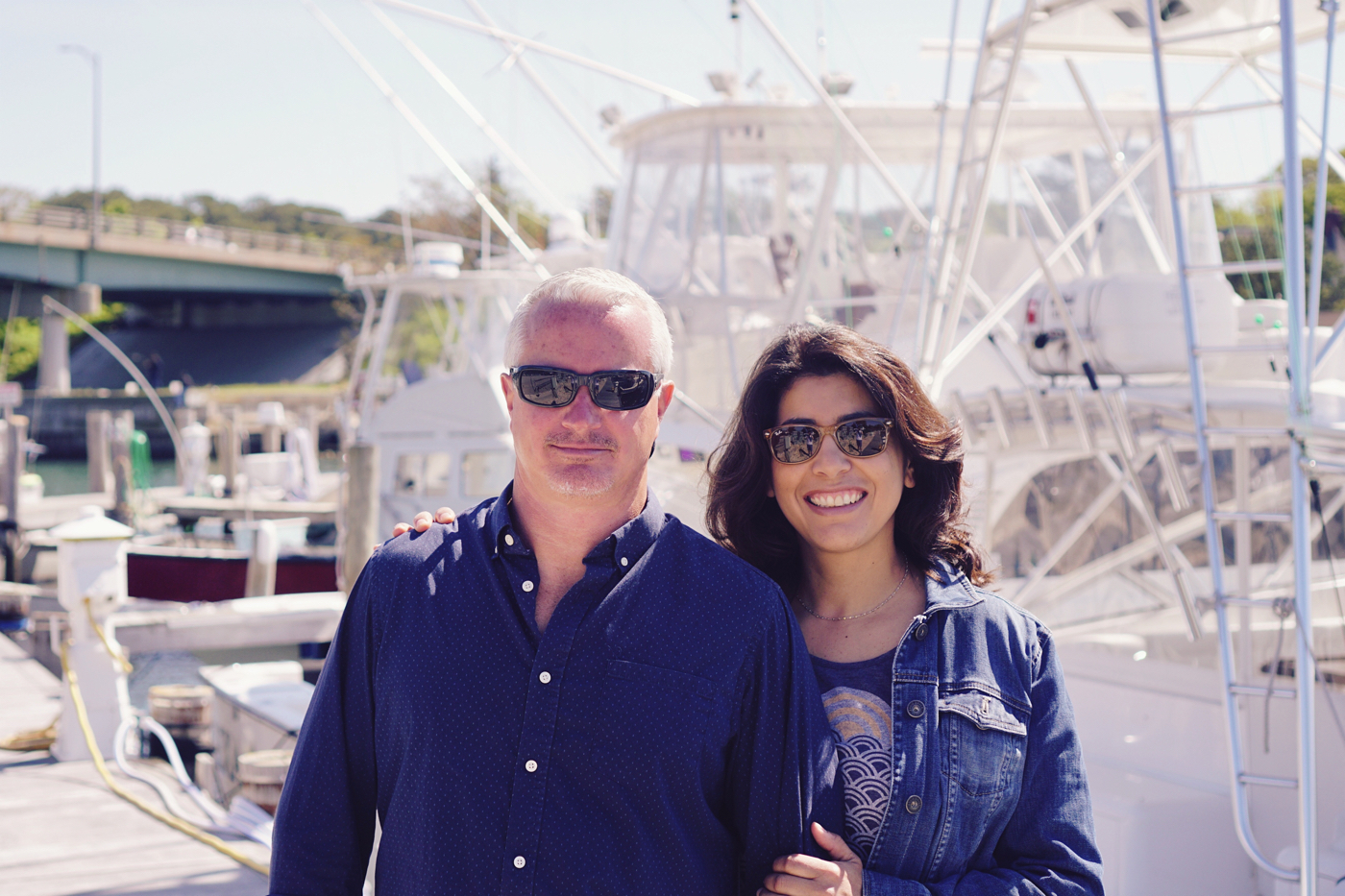