LongHouse Reserve in East Hampton hosted its annual Rites of Spring opening day event on April 25. The Rites of Spring offers visitors an opportunity to experience a number of unique and dramatic art forms that entice the imagination. LongHouse exemplifies living with art in all its forms. Founded by Jack Lenor Larsen, its collections, gardens, sculpture and programs, reflect world cultures and inspire a creative life.

The gardens at LongHouse serve as a living case study of the interaction between plants and people in the 21st century. Landscapes are created as an art form with a wide variety of natural and cultivated species. Sharing these extensive plant collections, and experiencing them in relation to living spaces, over time, and with seasonal changes, is the chief pleasure for Mr. Larsen. ADDRESS: LongHouse Reserve | 133 Hands Creek Road | East Hampton | T631.329.3568 | F631.329.4299 | info@longhouse.org

Women with Sheep by Kiki Smith: Born in 1954 in Nuremberg, Germany, Kiki Smith grew
up in New Jersey, where, as a young girl, she assisted her father, artist Tony Smith, by making cardboard models for his geometric sculptures. This training in formalist systems, combined with her upbringing in the Catholic Church, would later resurface in Smith’s evocative sculptures, drawings and prints.

Included in the Rites of Spring are the following installations:

Eye of the Ring by Takashi Soga: Takashi Soga (b.1952) is welcomed back to LongHouse with his Eye of the Ring (2007). His kinetic sculptures are a source of pure delight for youngsters and oldsters alike. Defying gravity, they disrupt our expectations of terra firma and rework our comfort level. With the mid-century sculptures of George Rickey and Alexander Calder paving the way, Soga uses an ingenious method of counterbalances to create monumental pieces that seem to defy gravity and, moving to and fro, hover weightlessly, without obvious visual support.

Spheres by Grace Knowlton: American-born sculptor, octogenarian Grace Knowlton (b.
1932), expands her collection at LongHouse with Spheres; orbs created, in her words, by “the laying on of hands.” These sculptures — Knowlton’s conception of “painting in the round” – offer a rich relationship between the space inside the shell and its external surface. Their graduated sizes and textural materials punctuate the gardens as we pause to admire.

The Mao Suit 2002 by Sui Jianguo: Praised by critics for being a “pioneer venturing to the farthest reaches of Chinese sculpture,” Sui Jianguo’s art explores his unique understanding and recognition of creation, form, diverse media, alternative methods and space-time. Sui Jianguo relies on the wisdom of native Chinese genealogy and channels of culture to serve as problem solvers. His Mao suit represents that initiative: bigger than life, it depicts the oversized personality of the leader while the hollow interior is seen by some as a symbol for Mao’s empty promises. 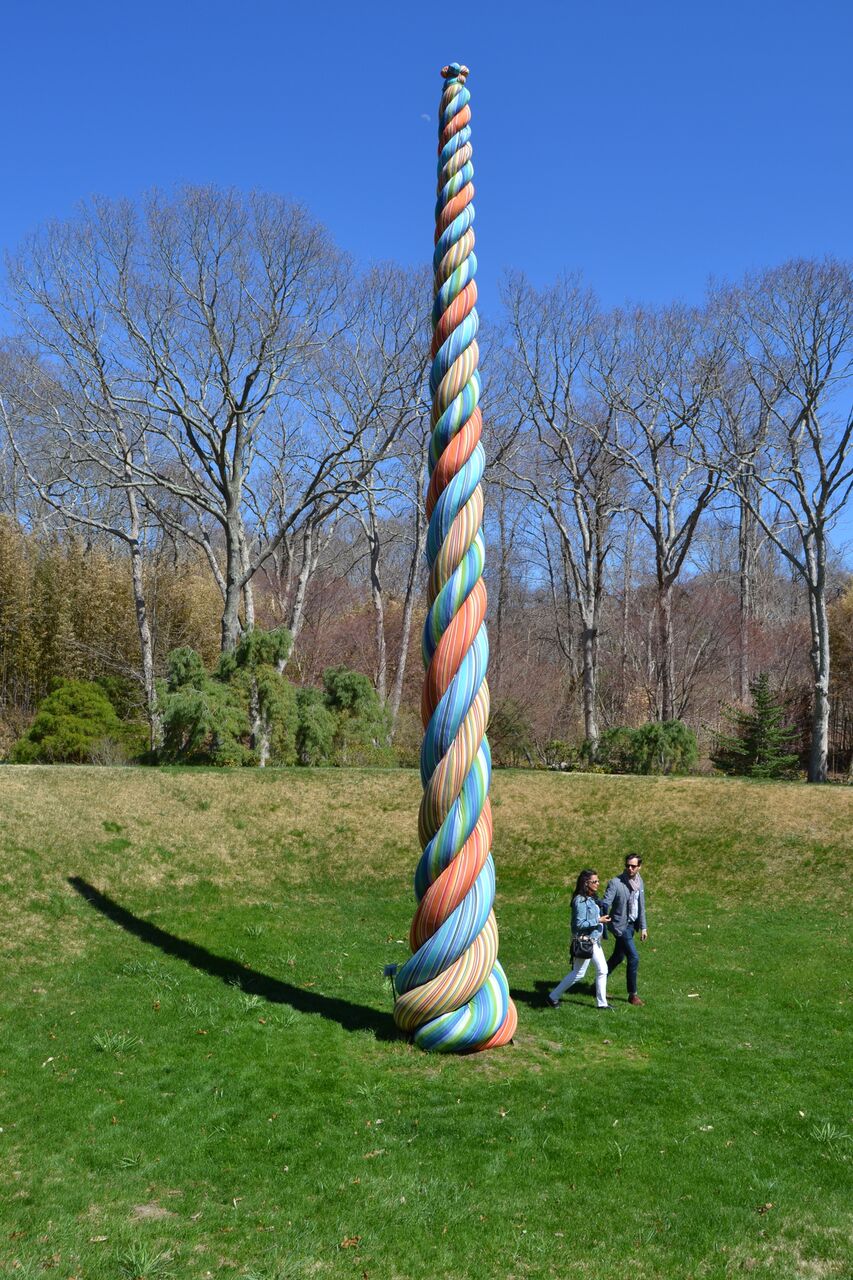