Eric Ripert, Josh Capon, Justin Smillie and Amanda Freitag were among the world famous chefs and special guest Ina Garten of Barefoot Contessa featured at the 2012 Chefs Dinner this past Saturday July 28th at the Hayground School. The event, in its seventh year is a benefit for Hayground School’s Jeff’s Kitchen and the Jeff Salaway Scholarship Fund.

The dinner was paired with wines chosen by Aldo Sohm world-class Chef Sommelier of Le Bernardin. A portion of the produce used in sit down dinner was sourced from Hayground School’s Slow Foods Greenhouse. There was a live auction following the dinner featuring exclusive culinary and travel packages.

An Annual Tribute to the Late Jeff Salaway

The Chefs Dinner series is the primary fundraiser for Bridgehampton’s own Hayground School (www.haygroundschool.org) and an annual tribute to the late Jeff Salaway, a widely respected and beloved restaurateur and one of the school’s co-founders. Since it’s inception, this event has raised over $1,000,000 for Jeff’s Kitchen and the Jeff Salaway Scholarship Fund.

Says Nick & Toni’s Toni Ross, who was also the late Salaway’s wife, “Jeff believed that the growing, preparation and sharing of food is a primal human experience and the foundation of family and community.” Jeff’s Kitchen is a full service professional kitchen and classroom fitted with top-of-the-line Viking appliances and a new pizza oven.

Classes in nutrition, food science and cooking are held there for both children and adults. Completing the facility, recently a professional Farmtek greenhouse was erected by Hayground students, staff and friends with funds provided by Slow Food. 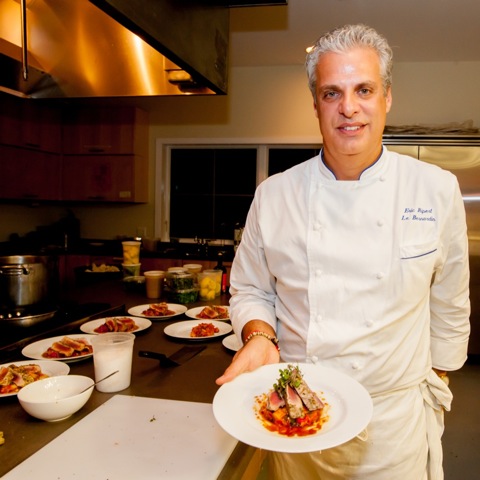 Hayground School is an independent alternative school, committed to a program of innovation in a community of diversity, both economical and cultural. Hayground students range from 3-13 years of age. The mission at Hayground is to provide an open, community school where conventional teaching methods are replaced by new ways of teaching and learning. We work to give our students the tools, perseverance and determination to be independent thinkers and continue learning throughout their lives.